There are two places where formulas can be used in the report designer tool:

Both have the same syntax, but are used in different ways.

These can be entered in the Advanced section of Column Options.

To add a new report column so that you can enter a value source formula, click Layout -> Add Formula Column: 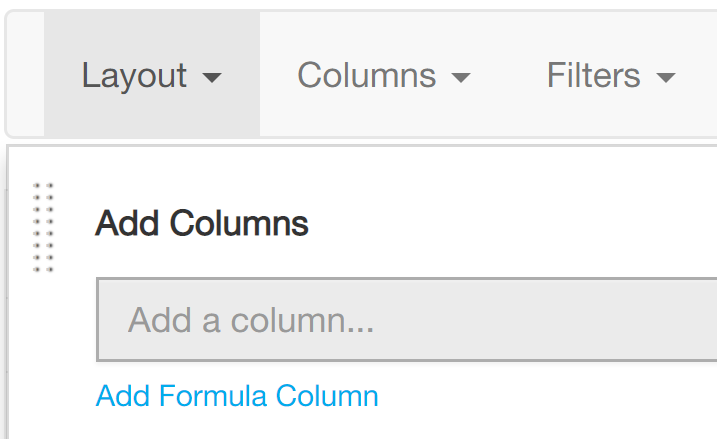 This will give a new blank column with the formula "Enter formula here" - a reminder to update the formula!

A single row filter formula can be entered in the Filter section of the designer.

Columns values are referenced by putting the column name in square brackets. For example: [A Column]

Note: The column names are provided by the data source and do not change in formulas if the title is changed.

Fixed values (i.e. literals) can be used in formulas.

Operators can be used to combine values. Order of operations is respected (i.e. parentheses first, then */, then +-, left to right).

Values can be compared. This is useful for row filters, or when using the IF function.

There are several functions which can be used to modify values. They consist of an upper case function name, followed by a number of arguments in brackets. For example: FUNCTION(value_1, value_2)

These functions only operate on text values.

These functions only operate on numeric values.

These functions only operate on date values.

It is possible to convert currency values from one currency to a single base currency. By default AUD, CAD, EUR, GBP, NZD, USD and ZAR are supported as the "use_currency" values, but it can be overridden to use any other currency. If you know exactly which currencies your organisation(s) support, then it's advised to specify them in the function because it will speed up the number of lookups the report column has to do.

Most of the functions in Wink Reports operates on the value in a single row. For instance you sum two columns from the same row.

However there are also functions which can be used to generate extra rows in a report, or to calculate values from neighbouring rows. The functions marked as "Window Functions" work the same as SQL window functions and operate across multiple rows, but won't reduce the number of rows in the report. To collapse rows for summaries, please look at Aggregation. It is also worth noting that using window functions and aggregation together in the same report can have unexpected results, so it's recommended to not combine them in your reports.

These functions can be conceptually tricky to understand, and are generally only recommended for advanced users. If you require any assistance, please raise a support ticket. :-)

G
Gavin is the author of this solution article.